Amongst the 62 fishermen that entered a carp fishing competition in Panevezys (the fifth largest city in Lithuania in case you hadn’t heard of it before) was a drone operated by Saulius Zaura. He was using a DJI Phantom quadcopter which is one of the most popular choices of drones used for fishing (also featured in this Drone fishing video). 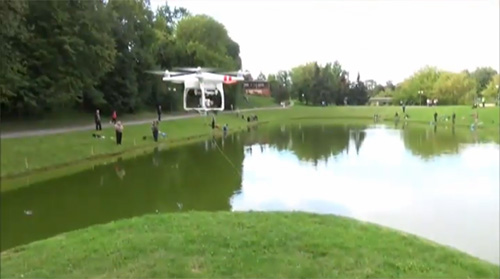 Instead of just using the drone for bait delivery he tied a line to the drone, along with a float, hook/bait and a weight then positioned over the lake and before lowering down dropping the line into the water. While fishing he also filmed the rest of the competition using the drones video camera which you can watch below.

We’re not sure how long he managed to fish for due to the battery limitation however we can report he didn’t fair too well in the overall standings, while his competitors with rods caught carp up to 1.9kg he failed to catch a fish (this time!).