Mariner Drone – A Quadcopter for Fishing and Water Activities

Mariner drone is a high quality amphibious quadcopter with excellent water resistance features. The best thing about this drone is that it can withstand different kinds of environments. Nicknamed the submarine drone due to its ability to fly in water, the quadcopter has been immensely useful in fishing and other water related activities. This uniquely designed rugged quad comes with highly reliable electronic systems that increase the drone’s stability when flying in windy and stormy weather.

The Mariner quadcopter has an airtight design that is made using a thermo plastic frame that is watertight and highly durable. The drone is powered by a 2.5Ah LiPo battery. When fully charged, the battery powers the drone for 12-15 minutes of flight time. Weighing an approximate 1.15 kilograms and measuring 51cm by 12cm, the drone has a compact weight and size ideal for successfully taking off, flying through and above water. When the camera compartment is attached to the drone, the quadcopter weighs around 2 kilograms.

The drone’s streamlined and powerful design makes it possible for a GoPro camera to be mounted on the drone without the stability of the drone being affected.

The Mariner drone comes with an inbuilt flight control system used in collecting flight path data. This data includes user command inputs, motor speed data, sensor data, and GPS location data. When the user flies the drone, the data collected is analyzed by the flight control system and the quadcopter respond to user command inputs. There are four different variations of this drone. The first variation features a RTF system that comes with a pre-installed radio transmitter and uses a NazaM-Lite Flight path controller. This is the best variation for fishing and capturing water sports shots as it has an autopilot hover that automatically reads GPS data.

The Mariner quadcopter also has an inbuilt video transmission for broadcasting videos and photos to a LCD screen mounted on the controller. In addition to this, the quadcopter comes with a protective aluminum casing for carrying the drone around without having to worry about any damage to the drone. 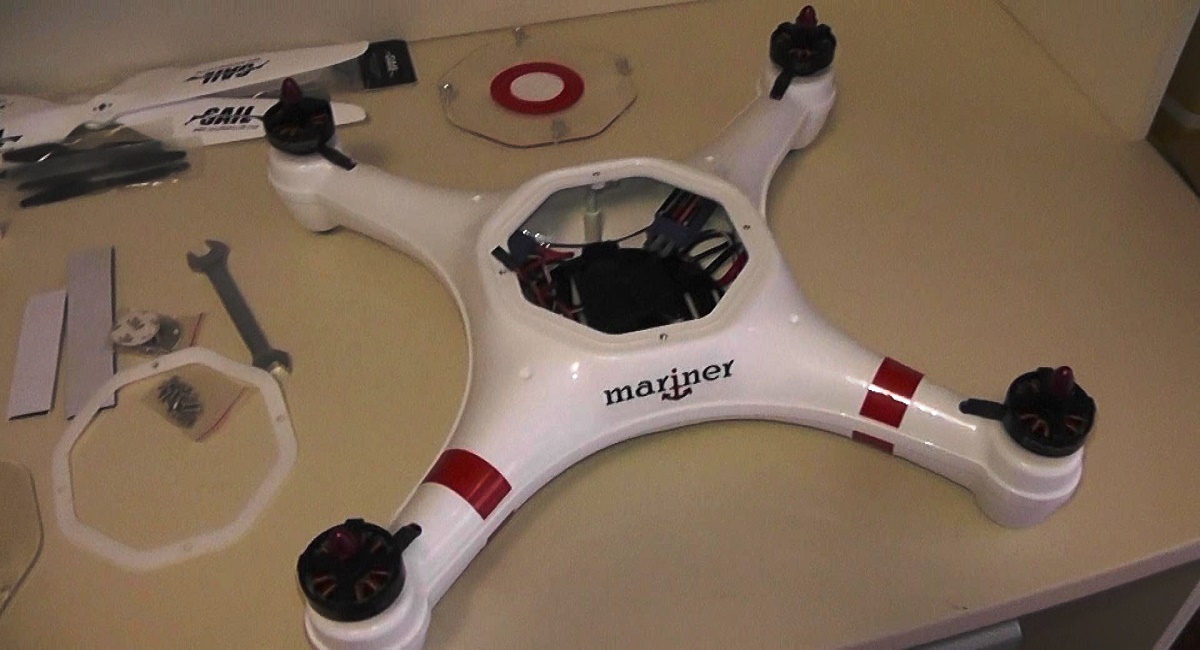 Pros of the Mariner Drone

Cons of the Mariner Drone

Additional Features of the Mariner Drone

The LCD view screen on the drone’s controller not only has well placed buttons but also has advanced features. These include the power indicator icon, a USB connection port and a very powerful GoPro camera. The camera enables users of the drone to stream high quality videos while flying the drone over water or through stormy weather. For fishers, this allows them to locate fish easily with the 1080p video quality that produces excellent views. However, unlike other drones with a fishing twist, it is not possible to take still photos while streaming views from the drone.

The 2.5Ah LiPo battery supplies increased power to the drone thus allowing the quadcopter to have flight time of up to 25 minutes. After running dry, the battery is recharged in between 15-20 minutes and can then be used for the next flying session.